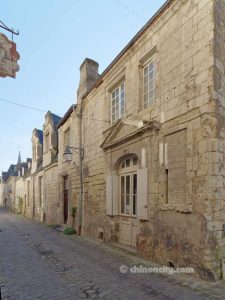 Chinon is a commune located in the Loire Valley in France. It is known for its rich history and its famous wine production. The history of Chinon dates back to the Roman times, when it was a small settlement located on the banks of the Vienne River. The town gradually grew in importance during the Middle Ages and became one of the most powerful cities in the region. In the 10th century, Chinon Castle was built on a hill above the town. The castle played an important role in the history of France, as it was a residence of many kings, including King Henry II of England and the French King Charles VII.

The Templars’ power and wealth made them many enemies, and in the early 14th century, King Philip IV of France, who was heavily in debt to the order, began to move against them. In 1307, he arrested many of the Templars and seized their assets. The Templars in Chinon were arrested and their castle was seized by the king. We can see in the dungeon some graffiti of the Templars.

During the Hundred War, the castle was a place of french royal army, in this castle the french pucelle Joan of Arc meet the french king Charles VII.

In the 15th century, Chinon became a center of the arts and culture, with many famous figures such as author and humanist François Rabelais visiting the town. The town continued to prosper during the Renaissance and many beautiful buildings and monuments were constructed, including the Gothic Church of Saint-Maurice.

In the 17th and 18th centuries, Chinon fell into decline as the political and economic center of the region shifted to other cities. However, the town’s rich history and beautiful architecture attracted tourists and visitors, and Chinon began to develop as a tourist destination. In the 19th century, the wine industry in Chinon began to grow and the town became known for its red wines made from the local Cabernet Franc grape. Today, Chinon wine is considered one of the finest in the Loire Valley and the town is a popular destination for wine tourism. Visitors to Chinon can explore the medieval castle, which was once a residence of King Henry II of England, and the Old Town, which is filled with charming half-timbered houses and cobblestone streets. The town is also home to several museums, including the Musée Rabelais, which is dedicated to the famous author and humanist François Rabelais. Chinon also has an active wine-making industry and visitors can take tours of the local vineyards and taste the wines. Overall, Chinon is a destination that offers a unique blend of history, culture, and wine tourism. The town is also a UNESCO World Heritage Site, recognized for its well-preserved medieval architecture and its cultural heritage.

In recent years, Chinon has also become a popular destination for cycling and hiking, as the town is surrounded by beautiful countryside and a network of trails. The Loire à Vélo cycling route passes through the town, making it a great starting point for a cycling holiday in the region. The town also has a variety of accommodation options, from traditional bed and breakfasts to modern hotels, making it a great destination for a weekend getaway or a longer stay.

In conclusion, Chinon is a town with a rich history and a unique blend of culture, wine tourism and outdoor activities. The town’s well-preserved medieval architecture and cultural heritage, combined with the beauty of the surrounding countryside make it an ideal destination for visitors looking to explore the Loire Valley. Chinon is a destination that offers a unique blend of history, culture, wine tourism, outdoor activities and a great destination for a weekend getaway or a longer stay.